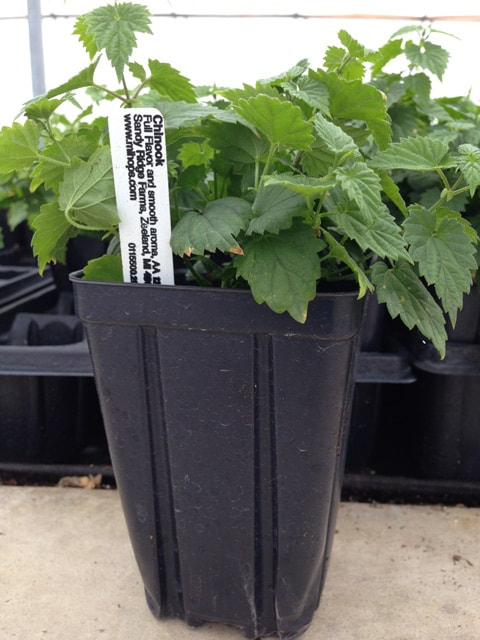 Hop plants! Not a rhizome, but an actual living, growing plant ready for transplant into your home hop garden. Choose from Cascade, Chinook, Comet, Magnum, and Triple Pearl.

Expected delivery to the shop will be mid-April. These will not be available for shipping because they will already have had to deal with the stress of shipping from Michigan and they'll need some TLC after they arrive.

Cascade is an aroma hop that was developed by the U.S.D.A. breeding program in Oregon and released in 1972. It has a medium strength aroma that provides a unique floral/spicy character with well balanced bittering potential. Cascade is the most popular hop with the U.S. craft brewing industry. Fruity citrus quality leaning toward grapefruit.

Chinook was developed by the U.S.D.A. breeding program in Washington State and released in 1985 as a high alpha variety. It has a highly acceptable beer aroma profile with smooth bitterness and full flavor and spicy/citrus/pine notes.

Comet was bred to address the need for higher alpha hops, its flavor profile rests heavily on a strong accent of grapefruit.  It features solid bitter capabilities, but recently there has been a surge in its use as a dry hop in ales and IPA’s for it's citrus, fruity and earthy qualities

Magnum is a high alpha variety that was developed at the Hop Research Center in Huell, Germany. It is widely grown in the Hallertau region of Germany, and is also grown in the U.S. Magnum is a good bittering hop with low flavor and aroma - for Ales and Lagers.

Triple Pearl is a triploid daughter of Perle that was released by USDA-ARS in late 2013. Pleasant, mellow aroma with notes of orange-citrus, orange rind/zest, melon, resin, spicy and slight pepper.